Home of The World's Strongest Hinge!

We have several aluminum mount blocks which are designed to accommodate our ILDH-4A-90 and ILDH-4A-180 hinges, as well as some Soss-type hinges (manufactured by other companies).

The MB-4A Mount Block allows you to insert the hinge into the mount block and secure it with mounting screws.  The cut-out is centered in the mount block.

The MB-4A-NS is very similar to the MB-4A, but differs because the cut-out is not centered but is offset to one side.  The “near-side” wall is about 0.015″ inches thick. 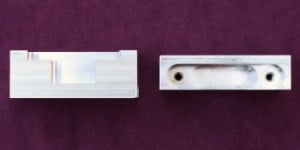