Home of The World's Strongest Hinge!

Our aircraft cabinetry table hinges are made from 416 stainless steel and do not fail when used properly. These patented drop-leaf table hinges use a double pivot-point principle which ensures that the table leaves do not bind when being opened or stowed. An installed spring times the rotation so that one leaf rotates 90 degrees around one pivot point, then the leaf moves an additional 90 degrees against the spring-loaded pivot point. This timed rotation provides for a smooth table hinge operation and makes the Morgan stainless steel hinges the “strongest hinges in the world”. 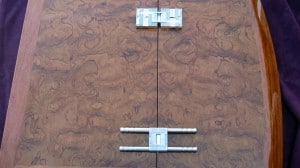 Below is a picture of the HCTH-4S-180 lying on top of two table leaves. Also depicted are four LM-10/32-2.2 leg mounts which are commonly used to aid in installing the hinge.

The HCTH-4S-180 hinge fits into a 1/2 ” or larger panel. We manufacture hinges for other sized table leaves ranging from 1/4″ to over 5/8″ in thickness. Some of those drop-leaf table hinges, their ratings and appropriate panel thicknesses are depicted in the table below. For a description of load testing procedures, click here. 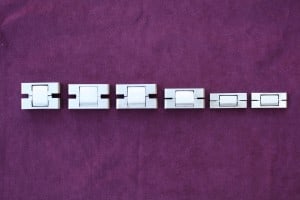 If a customer plans to plate a portion of the hinge, it is necessary to install the spring after plating has been completed. Since it is far easier to install a new spring (one that does not have its “tail” snipped after installation) than one installed by us prior to shipment, some customers will ask tht the hinge be shipped with a loose spring.